Think woodland garden festival, deckchairs, Mexican waves, gypsy caravans, poetry slams, acoustic guitar, ring warming, handfasting, bubbles and wood signing and you’ll start to get a feel for Erin and Ben’s super cool garden festival wedding ceremony held in the woodlands at the fabulous backwater location at the privately owned Markington Hall in Ripon, North Yorkshire.  It is has to be one of our favourites of 2015 and Woz at Howelljones Photography has captured the whole atmosphere and spirit of the day fabulously. We were also delighted that their ceremony and celebrations were featured on Festival Brides (27.7.15) so do pop by and see what they thought of it!

We knew the moment we met Ben and Erin that their ceremony was going VERY unique and special. Both are talented professionals but they definitely work to live not live to work.  Whenever they get the chance they are off in search of  bluebird days snowboarding with their friends and travelling the world. Ben and Erin were a great couple with very laid-back  attitude who were open to new ideas and experiences and certainly know how to party! The only thing they were very clear about was that they wanted it to be a unique, personal and chilled garden festival party where ties were not compulsory and trainers WERE allowed!

It was not a day for rules, etiquette and opinions, there are too many other working days in life for that!!  To give you an idea, their guests had been told to expect the unexpected!

We created a ceremony area nestled in the circular woodland “Copper Beech Glade”, an area surrounded by tall ancient yew, oak and copper beech trees, and against the backdrop of the colourful trio of gypsy caravans, Bella, Carmen and Rosita, reaching across the arched stone bridge that crosses the stream.

We also had a small wooden “stage” in the centre covered with Ben’s rug collection picked up along his travels- Ben is very fond of rugs and cacti and cool wood carvings from around the world! It was no co-incidence that we designed an amphitheatre of deckchairs; Ben proposed to Erin as they sat on deckchairs in a quiet little spot after a bluebird day of snowboarding in Mayrhofen so we wanted to bring this into their ceremony and it created the perfect festival feel. 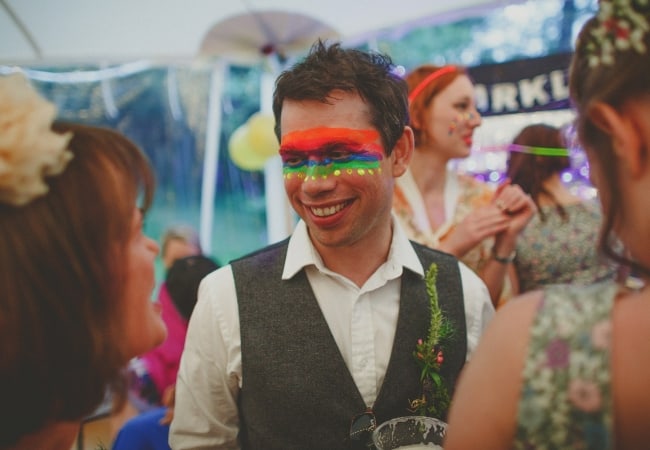 Back to top Next

Email ceremonies@janshillito.co.uk, call 07745 385 981 or use the form below. Say hello! and join our line up of awesome couples.